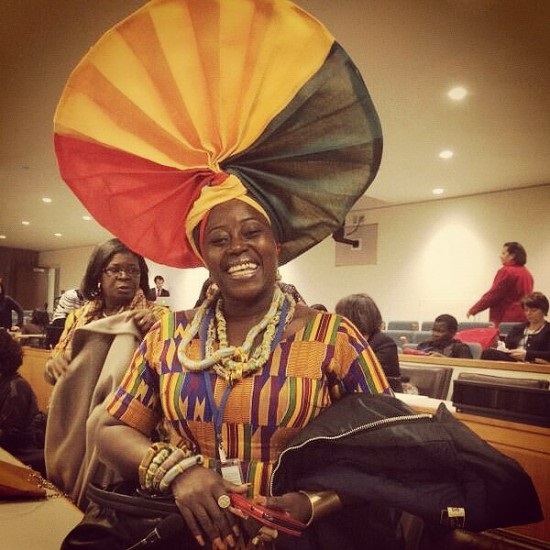 Upon all the noise she’s been making on radio and TV, Akumaa Mama Zimbi, Ghana’s most popular sekx therapist, couldn’t stand the potency of her husband’s 17-inch rod.

Just like Mzbel who posts all kinds of suggestive pictures online but says she’s not good in bed, so is Akumaa Mama Zimbi. After many years of demonstrating and teaching couples how to have sekx, it has now come to light that she’s only good at talking plenty on radio and TV, but in real life, she’s dead as a dodo.

A copy of the Doctor’s report we have in our possession shows that Akumaa, 35, who was at the receiving end of the bout, lost consciousness after the 5th round. Her husband, Mr. Bright Tweneboah Koduah, we are told did everything possible to resuscitate her but to no avail until a next door neighbor came to their rescue.

According to the neighbor, he heard Akumaa utter words like “medaase, wo beku me o, Kofi papa to wo bo, buei” in a very romantic tone so he thought it was one of her episodes been shown on TV, not knowing she was suffering inside.

Per the neighbor’s account, he could see Akumaa was exceedingly exhausted when he went to her rescue that night.

“I tell you, the love doctor was very exhausted. Mr Tweneboah told me ever since they got married, they’ve never had the opportunity to engage in this exercise because Mama Zimbi always plays hide and seek with him. He said he married her because he knew she would be extraordinarily good in bed – not knowing she can’t walk the talk. That particular night, Mr Tweneboah said he really did a lot of convincing before the ‘Odo Ahomaso’ host agreed to mate.”

“He therefore requested that his wife gives him the Manchester United Sekx Position she’s been teaching people on TV. Shockingly, Mama Zimbi didn’t know a thing about the things she’s been teaching. Just 5 seconds into the game, she told the husband she was tired but Mr Tweneboah said he forced her till round 5 was over. Right after that, Akumaa fainted,” he added.

Mama Zimbi, who was technically knocked out, is currently receiving treatment at the hospital where doctors are trying their possible best to resuscitate her.