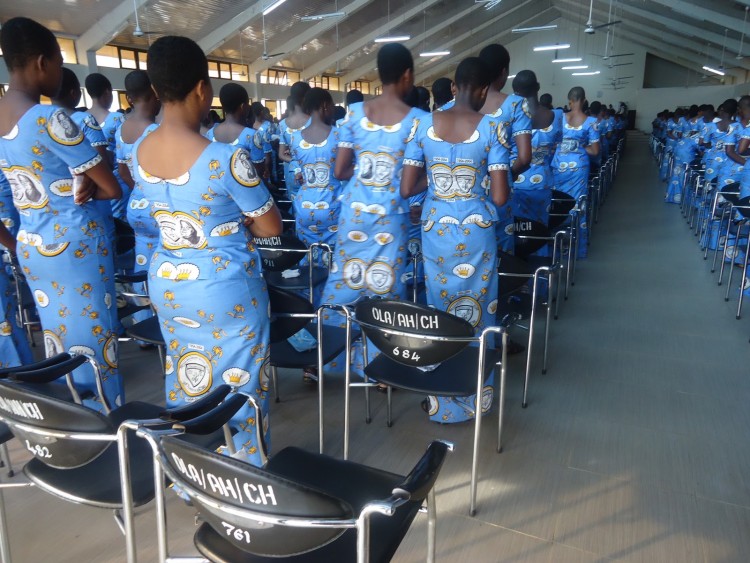 It looks like angel Gabriel visited Ola girls in Ghana and did not stop at the Flagstaff house for a glass of sobolo with President Mahama. What a disrespect to the presidency.

Over the weekend, ScrewLife.Com reported that 6 Ola Girls SHS students have been impregnated by a biology teacher-God is Bless Coffie in his interesting and one of a kind Reproduction Health Experiment extra-tuition sessions which took place in the school’s church building.

“Apparently, seeing something real, touching it or having done it in persons makes it difficult to forget—and it was at the back of this logic that the teacher was able to keep everyone in the dark while he had his way the students.

Once a week, we are told,  students will strip n*ked during this special ‘Reproductive Health Experiment’ class, where other students will have live opportunity to see and touch the breasts of others and also see different versions of pubic hair.

That was how far most people thought things went without knowing the teacher was having real s*x with some of the girls under the disguise of experimentation inside the school’s church building. Six of these girls have been found to be pregnant.

God is Bless Coffie was arrested by Volta Regional Police Officers yesterday—and we are told he argued with law enforcement officers that it was mere experiments gone wrong and as a scientist, such things are common within his discipline.

That explanation was enough to put him behind bars where he is enjoying free accommodation and food while awaiting to be arraigned before a magistrate this week.”

In a press release signed by the school’s headmistress and released on the school’s website to explain things further, she calmly said;

“It is ridiculously insane for anyone to think that these 6 pregnant virgins were outsmarted by their teacher-God is Bless Coffie, who is a teacher of great reputation and remains a valued product of this catholic institution for nearly 10 decades.”

The stated continued “the good people of Ghana should ignore speculations that the pregnant girls were worked on by a teacher—because to the best of our knowledge, the pregnant girls are still virgins. The only conundrum is, how this happened.”

“Ola Girls is a strong catholic institution where chastity is a greatly cherished virtue so until a medical report states otherwise, the story of these girls can be juxtaposed with the biblical story of Mary, the mother of Jesus,” the statement concluded.

A not so well connected source at the school told a radio station in the Volta Region that, one of the girls, called Innocent Mawuli, 17, claims she has never had s*x but multiple independent medical examinations state she is nearly 3 months pregnant.

Perhaps, miracles do really happen in Ghana; a country where cocaine through the holy touch of God easily turned into a powder in the confiscation room of law enforcement agencies not so long ago.

Remember, in 2015, a beautiful South American catholic nun in the eastern Italian region of Le Marche ‘miraculous’ had a baby in Italy, after complaining she had a stomach pains—not knowing she was pregnant.

Share on Facebook Tweet on Twitter Share on Google
https://screwlife.com/2016/01/19/ola-girls-shs-says-the-pregnant-6-students-are-still-virgins-because-the-school-is-a-catholic-institution-that-prioritizes-chastity/2016-01-19T02:19:55+00:00SL StaffBuzzOLA Girls SHS Headmistress
It looks like angel Gabriel visited Ola girls in Ghana and did not stop at the Flagstaff house for a glass of sobolo with President Mahama. What a disrespect to the presidency. Over the weekend, ScrewLife.Com reported that 6 Ola Girls SHS students have been impregnated by a biology teacher-God...
Vincent SL Staff[email protected]AdministratorScrewLife.Com
Tagged in OLA Girls SHS Headmistress
«Next Post Ghanaian Slimming Pills Seller- Cecilia Marfo Arrested in New York for Being too Fat
Ghana Prisons Service To Send Ataa Ayi To Guantanamo In Exchange For One More Gitmo Detainee Previous Post»