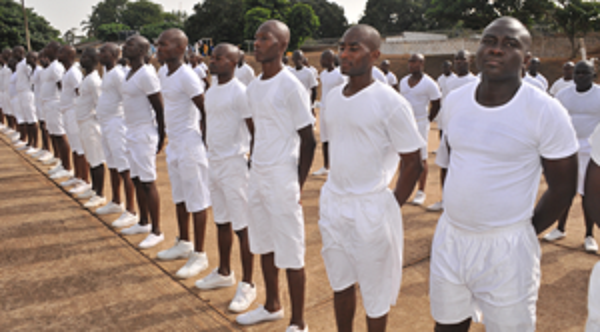 Ghanaian Policemen are generally known for one thing – collecting bribes with swag without the closest person noticing. With such attitude, Ghanaians were not surprised when a survey conducted by the Institute of Economic Affairs (IEA) ranked the Ghana Police Service as the most corrupt institution in Ghana.

Information reaching ScrewLife.Com indicates that 250 Police trainees were asked to go home over the weekend for failing to pass a test that was conducted to assess their bribe-taking skills. The test which was made up of 20 objective and 5 written questions were set by 10 Police Officers who have had more than 45 years practical experience in collecting all sorts of bribes including tissue papers. Even though quite a few passed the written test, all of them could not secure a pass mark for the practicals.

Giving reasons why those 250 trainees were sacked, Inspector Douglas Yaw Dagadu said the sacked trainees lack the needed bribe- taking skills. According to him, should the 250 individuals be accepted into the force, the Ghana Police Service will lose lots of money since they (250 people) won’t be able to generate income via bribes for the service.

Inspector Dagadu further stated that the Ghana Police Service needs smart people who won’t be caught in any bribe-taking exercise or whatsoever. “Over a period of 5 years, we’ve trained about 15 million Policemen who collect bribes from drivers discreetly. Those are the kind of people we are looking for,” he said.

Asked why they embarked on this training in the first place, Inspector Dagadu pointed out that the current breed of police personnel who stand by the roadside have made it so obvious for Ghanaians to know that the Police Service is synonymous to bribe-taking. This training, as he said,  was therefore meant to train new Policemen on how to collect bribes by the roadside without anybody noticing.

According to him,  the Police Service will be recruiting new people to replace the sacked ones so interested people who are willing to join the Ghana Police Service to be trained as bribe catalysts should call the toll free number, 419, for more information.

Share on Facebook Tweet on Twitter Share on Google
https://screwlife.com/2016/04/28/police-trainees-sacked/2016-04-28T21:48:52+00:00SL StaffBuzzShocking NewsGhana Police Service
Ghanaian Policemen are generally known for one thing – collecting bribes with swag without the closest person noticing. With such attitude, Ghanaians were not surprised when a survey conducted by the Institute of Economic Affairs (IEA) ranked the Ghana Police Service as the most corrupt institution in Ghana. Information reaching...
Vincent SL Staff[email protected]AdministratorScrewLife.Com
Tagged in Ghana Police Service
«Next Post Adidas Says the Company Will Sue Shatta Wale for Patronizing Fakies & Shatta Says It Was A Gift from Achipalago
15 University of Ghana Graduates Sue the University for Not Securing Any Jobs Since Completion About 6 Years Ago Previous Post»